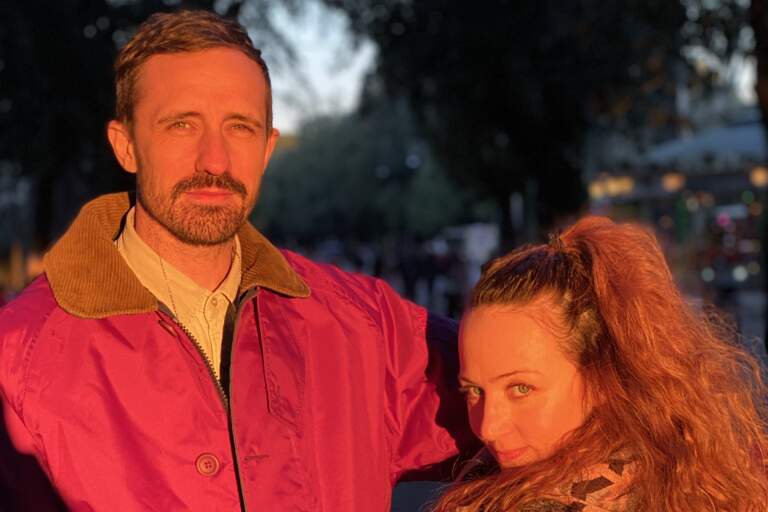 Christine Gouzelis is one of the directing members of Jukstapoz Company and is a mixture of Greek/Canadian origins.

Following her completion of studies at the acclaimed National Greek Academy of Dance, she received the DanceWeb scholarship for Impulstanz - Vienna in 2004. That same year Christine began a long-term association with the renowned master of performance David Zambrano, she continues to do so through various projects and training session. Becoming a member of the Hellenic Dance Company, she performed for choreographers such as Wim Vandekeybus, Anton Lachky, Rootlessroot, Athina Vahla, Pascal Rioult and others. Christine then joined the Israeli choreographer and associate artist of Sadlers Well's Jasmin Vardimon's Company, touring works internationally until 2010, she was then later appointed rehearsal director for the company in 2012. She has also been rehearsal director for Anton Lachky Company and Athina Vahla. Since 2010 and with the formation of Jukstapoz Company her main ambition was creating and performing, taking the companies productions internationally - United Kingdom, United States, Iceland, China, Hong Kong, Austria, Singapore, Spain, Prague, Greece, Germany, Belgium, Italy, Australia.

In 2014 Christine was invited for two years to become the Artist in Residence at the Hong Kong Academy of Performing Arts. She has co-created productions such as Fragile Matter, Echoing Woods, Savage Symphony and Perplexed Harmony and was nominated by the Hong Kong Dance Alliance for the awards of 'Best Choreography' and 'Best Ensemble' for her work - Fragile Matter.

Paul Blackman is one of the founding members of the Jukstapoz Company and is originally from Perth, West Australia. At a young age, Paul was literally thrown headfirst into the performing arts world by his acrobatic and circus trained mother.

After graduating from WAAPA in 2002, he worked with the West Australian Ballet 2003 and then Buzz Dance Theatre 2004–2005 touring interstate and regional Australia. Awarded 'best male dancer' in the Ausdance Awards 2006 and nominated for 'best dancer' Helpmann Award 2006. In 2007 was awarded 'best male performer' by Article19.

He began following David Zambrano after the ‘50Days' workshop and has continued to do so with various workshops and projects since - Tierras Enamoradas, EXIN, Inauguration Gala - TicTac Art Centre.

Paul has been a choreographer and movement coach for contemporary and traditional operas working with an array of notable directors, singers and musicians at the Salzburg Festspiele, Odeon of Herodes Atticus, Vienna Staatstheater, Theater Kiel, Salzburger Landestheater, Athens Megaron Mousikis, Mecklenburgisches Staatstheater.

In this last decade, he has encountered and worked with a diverse group of renowned Artists, such as Jan Lauwers, Jozef Frucek and Linda Kapetanea - Rootlessroot, Jasmin Vardimon, David Zambrano, Jonathan Hollander, Susan Quinn, Alexandra Liedtke, Athena Vahla, Felicity Bott and Simon Dow. Currently, his main focus is co-artistic directorship of Jukstapoz Company. Based in Athens - Greece and choreographing for multi-scaled commissioned works for international coordination. Paul also continues to share his enthusiasm for the Arts with teaching and coaching dance workshops throughout the world in various renowned festivals, institutions and companies.