The Göteborg Opera is the recipient of the International Opera Award in the Sustainability category, 2022. On this page, we present our work with social and environmental sustainability. 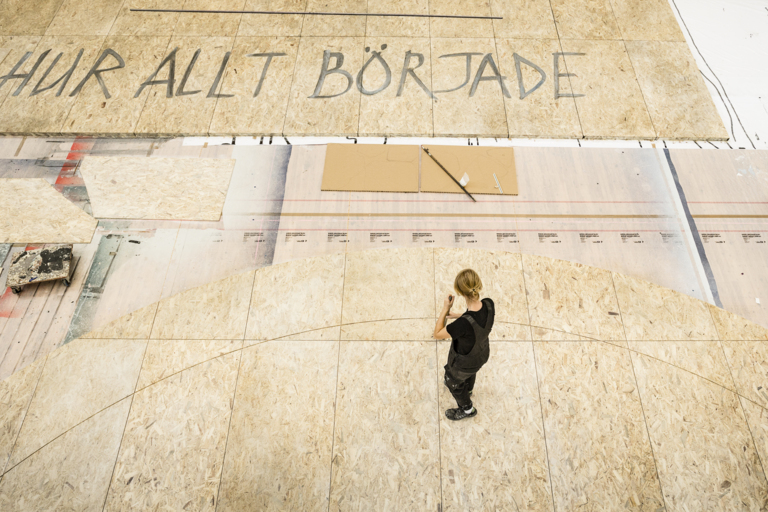 ”The Göteborg Opera operates within civil society by using creativity, a contemporary outlook, curiosity and openness to provide access to opera, dance, musicals and concerts for all people within the region Västra Götaland. According to this mandate, and throughout the entire organisation the Göteborg Opera strives for social, environmental and economic sustainability. This approach requires that all of our resources are used wisely and responsibly.”

From the Göteborg Opera’s Sustainability Report 2019 (In Swedish)

The Göteborg Opera has always worked whole-heartedly with environmental questions, and can be  considered a leader within the performing arts industry. Many of the changes which have been implemented began as ideas from the staff. We are always looking for new areas in which to reduce our footprint, and thanks to each change, we’re reducing our energy needs from year to year. Care for the environment permeates the entire organisation, and is visible in areas both large and small: from which paints we use in the props department, to movement sensors controlling office lighting.

Between 2018–2021 we presented Wagner’s Ring Cycle (Der Ring des Nibelungen) in a production that drove our environmental work even further forward. The four operas which make up the Ring Cycle in fact center around this burning question: exploitation of natural resources and the consequences this has. So this was a perfect chance to present this epic drama in a production with as little environmental effect as possible: a green opera.

Göteborg Opera has operated according to ISO 14001 since 2004 (See the certificate), and our restaurant has been certified with the Nordic eco-label ”Svanen” since 2011. In 2012, the Göteborg Opera – as the first opera/theatre in the Nordic region and the second within Europe – went one step further to become registered for both EMAS-certification (The EU Eco Management and Audit Scheme) and ISO 14001 – so the house became uniquely certified both from international and European quality standards for environmental work. In 2016 we decided to discontinue EMAS-registration since an update of the international ISO 14001 standard covered all of our environmental goals to be covered within the one certification.

The opera house roof was for several years home to 50000 small, winged, buzzing colleagues. Bee-keeping was a logical addition to the house, since honey soothes tired singing voices! Bees also communicate using dance, just like our dance company. Each year we harvest honey to be used in the restaurant kitchens, and sell a small amount in our Opera shop. In summer of 2020 the bees were relocated to Trädgårdsföreningen to better help pollination of the city gardens, in order to sustain floral diversity in and around the city. They of course continue their honey production, as always! 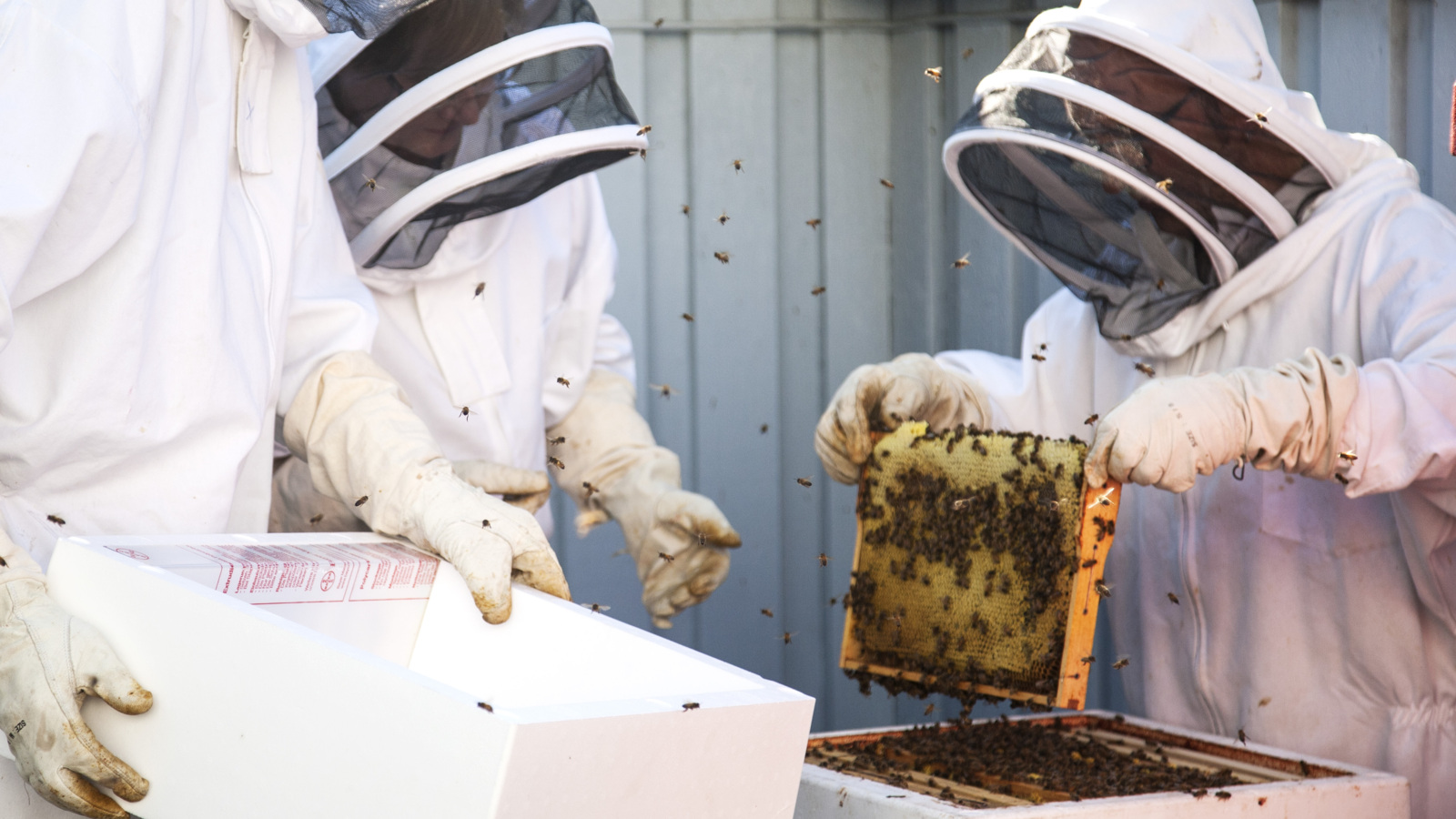 Re-purposed material in the Opera shop

Would you like a tote-bag from Madama Butterfly, a cushion from Oliver!, or a sheet from Carmen? We produce a 100 square-meter cloth banner for almost every Main Stage production, that is displayed on the side of the house during its run. After the finale the banner is re-purposed by our costume department and made into unique, attractive design objects for house and home. 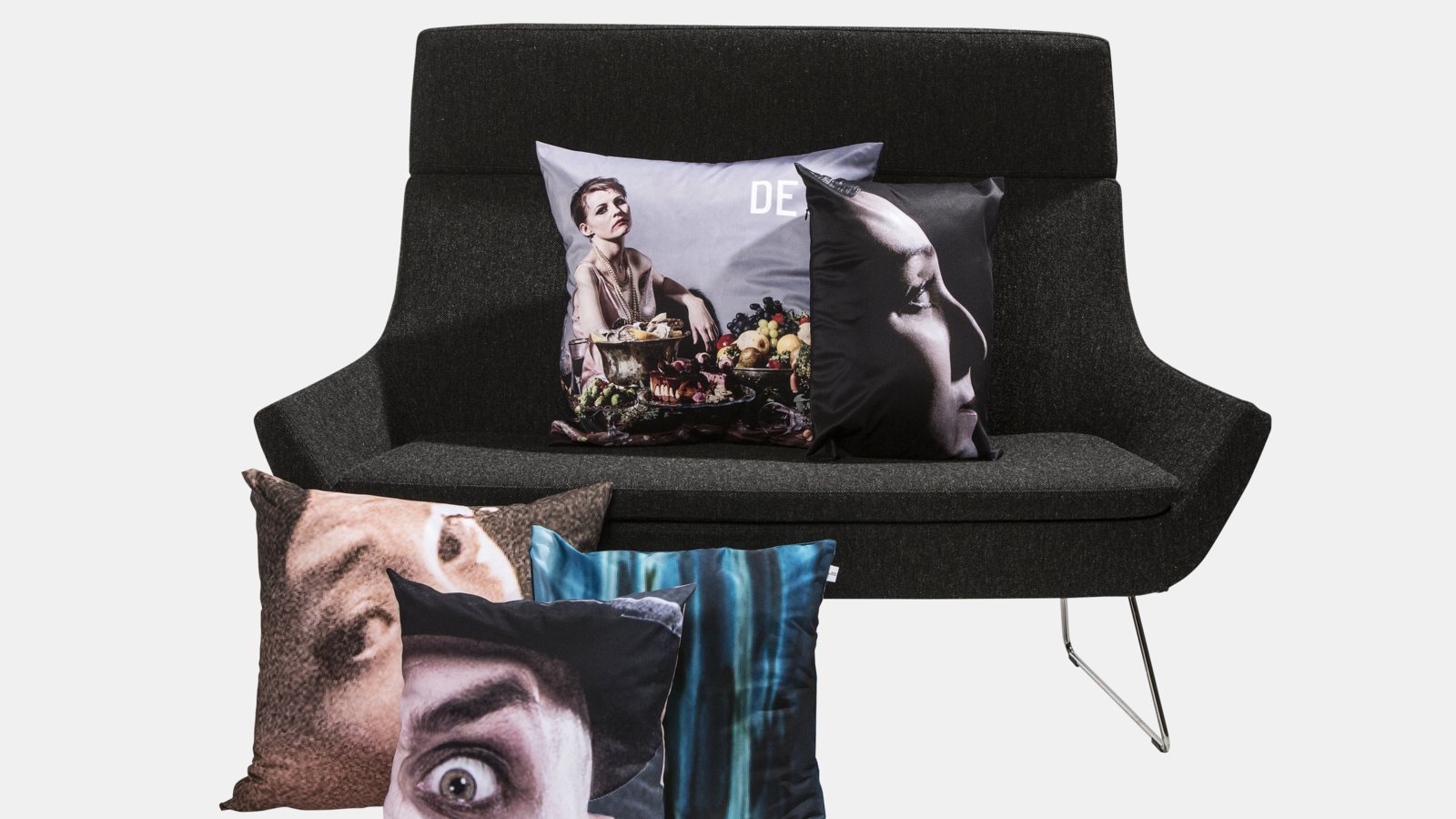 We are continually learning in sustainability classes – and sort everything from office paper, corrugated cardboard, glass, hard and soft plastics, as well as different metals. We also require high environmental standards from our suppliers – for example requiring deliveries in recyclable packaging or re-usable containers. Props and scenery are reused for as long as is possible and safe, and we use a modular system  which allows sets to be struck and rebuilt night after night, season after season. Sets are built upon a framework so that walls, moving platforms, stairs and more can be reused many, many times.

We don't rest on our laurels, but are always trying to improve. Maybe there are better alternatives to the materials most people use? Where possible, we use cloth bands instead of disposable tape, and reusable screws instead of disposable, chemical glues. We use real hair for our wigs instead of synthetically made plastics. Stages also need a lot of lighting, where we use low-energy alternatives where possible. Generally in the house we always choose low-energy alternatives, and lighting is activated (and, more importantly, de-activated) by movement sensors in all large locales and changing rooms. Besides using district heating to heat the house, we now also use district cooling.

If you have tips or ideas about how we can further improve, you are more than welcome to contact us at info@opera.se.

Eat with a clean conscience

Since its inception, the Gothenburg Opera Restaurant has had a clear environmental philosophy. These efforts have now been affirmed by the most prestigious environmental certification – the Nordic Ecolabel.

The Nordic Ecolabel applies to all operations managed by the restaurant: the restaurant itself, the cafés, bars, kitchen and staff canteen. The Nordic Ecolabel takes into account the entire life cycle of the restaurant operations, from the purchase of raw goods to waste management and everything in between. This means that the food served at The Göteborg Opera is – as far as possible – organic and Fair Trade certified, while GM foods are banned. Our seafood is checked against the IUCN Red List and the Nordic species databases as well as WWF’s Fish Guide, and as often as possible we purchase organic seafood varieties. Our menus always have at least one vegetarian option, and once a week we provide a meat-free lunch, where we offer a menu with a smaller carbon footprint. 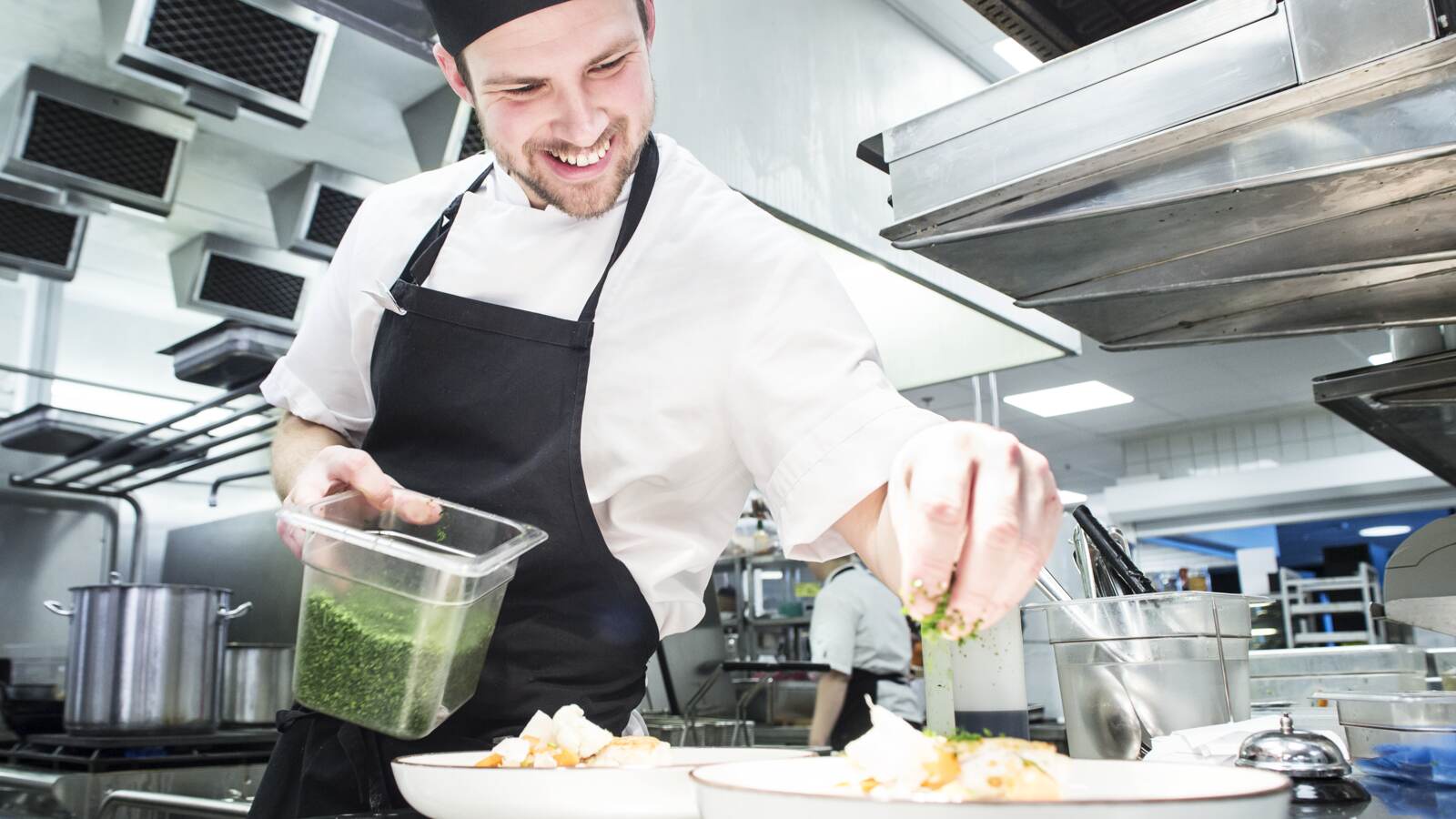 Most of our cleaning products are eco-labeled, food waste becomes biogas, and other used products such as glass, plastic, metal, cardboard, paper and fats are sorted for recycling. Electricity consumption is taken 100% from renewable sources. The rare one-off items we use, such as napkins, are eco-labeled. We employ both Nordic Ecolabel ceritifed laundries and printers and most of the light sources present in our facilities are LED or better than energy class B. We're constantly striving to develop and make environmental improvements.

The restaurant is also part of the Sustainable Restaurants network, created for restauranteurs who have a vision to positively effect the restaurant industry by working more sustainably.

Their focus is on five areas: food, environment and climate, REKO distribution, communication and economy – always with the customer in focus. Eating at a restaurant should always be a pleasant experience supported by an sustainable ethos. The network began in Stockholm and has now grown throughout Sweden.

The foundational principle is that humans are born free, and of equal worth, which includes universal and inalienable equal rights for women and children, the right to medicine and education, as well as the right to not be discriminated against. This principle of equal human rights for all, and the respect of the individual is essential for a successful organisation and a healthy work environment. It is a foundational principle in all of the Göteborg Opera’s relationships, both inside the house and to guests. No employee or visitor shall be discriminated against or harassed because of their gender orientation or expression, ethnic background, religion, disability, sexual orientation, or age. Everyone shall, competence being equal, have the same chance of employment at the Göteborg Opera – as well as the right to health, security, development and influence in the workplace. We at the Göteborg Opera work actively on all fronts to identify, avoid and prevent risks and undesired consequences and behaviours in relation to human rights.

The Göteborg Opera follows the Västra Götaland region’s guidelines in tendering processes. Our contract terms include (amongst other things) the UN’s general explanation of human rights and the UN Convention on the Rights of the Child (OHCHR).

Our Equal treatment plan (2021) includes an equal opportunity plan, diversity plan, a summary of discrimination law, a summary of the OHCHR (see above) and guidelines from the Göteborg Opera’s Children and Youth Council (GOBU). The Equal treament plan was produced by our Equal opportunity and diversity group (JäMå), who work with a mandate directly from the management group. The current chairperson is CEO Christina Björklund. 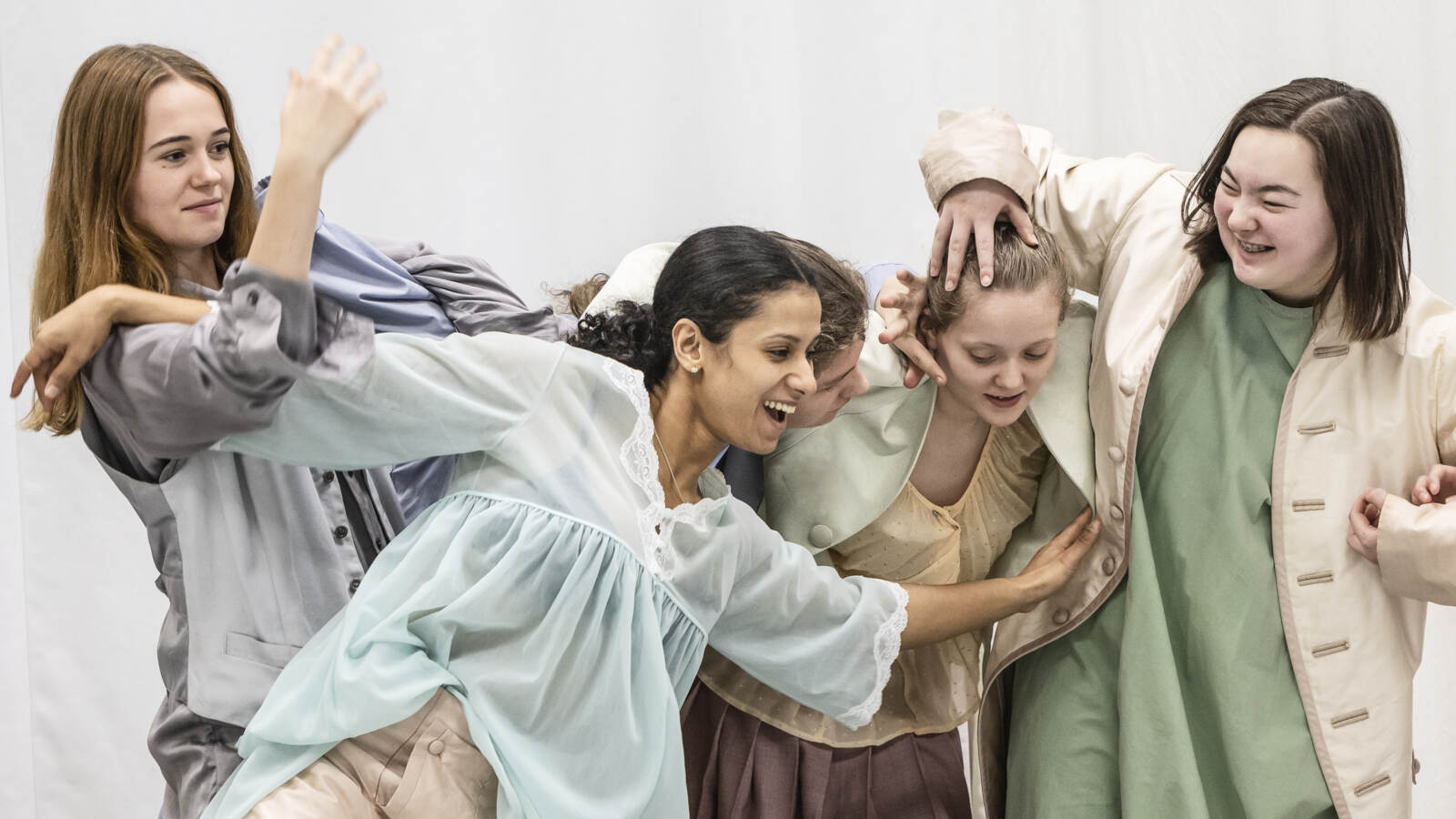 The council works to ensure that all children which are involved in projects, activities, choirs and performances at the Göteborg Opera are treated equally irrespective of which activity they are partaking in.

Accessibility on all fronts

Skapa’s goal is to encourage participation, artistic development and cultural experiences for everyone.

Skapa’s activities include encouraging participation, broadening audience demographics, increasing engagement, visits and tours outside the Opera house, and more. In short, Skapa aim is usually to minimise barriers to entry, so that what we create in the house can reach as many as possible, so that people who may have previously thought the Opera was not for them can fnd their way to us. We work with accessibility on all fronts, and Skapa is here to help develop platforms for both old and new stories to be told, and to make space for voices that are not often heard.

Skapa includes four choirs, one of which is for adults who would like to sing and work on-stage with people speaking many different languages and a multitude of different life experiences behind them.